Vietnamese Refugee Overcomes Troubled Past to Become a Dentist

(VOA): Sonny Duong went from being a Vietnamese refugee to a career as a dentist in the United States. But his path was not a straight or easy one.

Born in Vietnam, Duong came to the U.S. and worked hard as a child. But then he became involved in drugs and crime. Later, he learned the nail beauty business — caring for and shining customer’s fingernails and toenails. It is from this job he met the woman who told him he could, and should, become a dentist.

Three years after the Vietnam War ended, six-year-old Sonny and his family fled his birthplace. His parents had both been sent to “re-education camps” after the fall of South Vietnam. 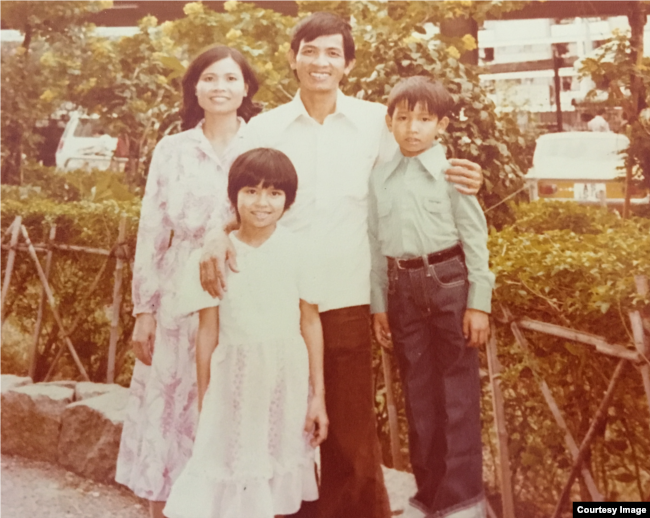 Sonny Duong with his parents, and sister in Hong Kong, outside the refugee camp where they lived after Vietnam, 1980.

His father and others worked together to build a boat in which to escape.

One of three children, Sonny was the middle child. His younger brother died in an accident in Hong Kong, where the family lived in a refugee camp before coming to the U.S.

Later, in Southern California, Sonny worked hard helping his parents earn money for food and housing. They would compete on weekends with other refugees for seats on buses, which took them to farms to harvest fruit.

He remembers his parents worked long hours, at several jobs. They bought machines for their home where Sonny and his sister helped the parents make baby car seat covers and other products made out of cloth.

​The children also cooked and took care of themselves while their parents worked. Sonny’s mother and father grew up poor in Vietnam, and neither had much schooling—but they wanted education for their children.

“So they didn’t have an education, so they don’t have anything other than their determination and physical labor. So, the hope for my sister and I, you know is that we have a better opportunity to get an education.”

So for Sonny and his sister, homework came first.

But when he got to high school, Sonny made some bad choices. He began abusing drugs, became involved with a criminal group, and went to jail. Duong told VOA he was guilty to crimes he is “not proud of.”

“And I think the reason that happened was because for the most part of my life I didn’t really have an identity. It was really hard to assimilate with Americans in Southern California, and the only people you had were other refugees. And I think there was a lot of discrimination growing up because the Vietnam War just ended.”

Then a break came — a telephone call from across the country.

In 1996, a friend called Sonny Duong from Richmond, Virginia. He asked the young man to come live with his family and work in their nail beauty business.

When his plane landed in Richmond, Duong had less than $20. His hope was to live a clean, drug-free and honest life. Fourteen years later he would graduate from Virginia Commonwealth University (VCU) with a dentistry degree.

With determination, he stopped using drugs and stayed off of them.

He learned the nail business. One of his best customers was a woman named Hazel Luton. She worked at the VCU School of Dentistry. Hazel urged the young man to do more with his life.

Sonny Duong learned to work in a dental laboratory at a nearby community college.

But he later decided he did not want to work in a lab; he likes people too much.

Duong told Hazel he would like to go to dental school, but was not sure if he could do it. It would mean up to 10 years of classes.

“And she said you know, it may take you 10 years, but in 10 years you can either be a nail technician where you are now, a dental lab technician, or a dentist. What title would you prefer to have?”

It was, he says, ‘the big moment,’ and he decided to try.

Sonny Duong met a man who gave him determination to finish. Marshall Brownstein worked at the VCU Dentistry School. Doctor Brownstein gave him a list of the classes he would need to take for admission into Dental School.

Duong put up the list at his home. Every time he would complete one of the classes, he would mark it off the list. Brownstein told VOA he is happy that Duong followed his plan, and says he is proud that he became a dentist.

Duong was also driven by a dream he had after his father died. In it, his father was angry, telling him how he sacrificed so much coming to this country for him.

Sonny Duong finished at VCU with a degree in Biology, becoming the first in his family to get a college degree. Then he was accepted into the VCU School of Dentistry. Up until then he had worked 50 to 60 hours a week to pay the cost of schooling.

But when he went to Dentistry School he stopped working as a nail technician.

In 2010, he finally graduated and became a dentist. Yet he had large loans to pay back.

​His plan was to work for a few years at a Community Health Center in Fredericksburg, Virginia, to pay back the money he owed. But he has never left.

“The rewards are just immeasurable. The people that I have reached and helped and the families, kids, and there are three generations in some families that I treat and the smiles that they have and the joy they bring to me, kept me in the program.”

Now married, and the father of two young boys, Sonny Duong says his education path was not a traditional one. But it is one that is possible, he says, because “we live in such a great country.”

“I always tell people, in this political climate, that I still feel this is the greatest country ever, because, if I put myself when I was twenty years ago, in any part of the world, I feel like I couldn’t turn my life around and become a dentist, have the opportunity to help the people that I help, every day.”