Houston :(Out Smart) Gay fashion designer Nicholas Phat Nguyen is one of those people you never forget when you meet them. If you spot him around town, the first thing that catches your eye is his unique style. Few people are able to walk the delicate line between gender, couture, and high art in quite the way he does. He is ethereal, in a way. He glows. And he shares some of that radiance through his fashion line: Mysterious by Nicholas Phat Nguyen.

The 30-year-old native of Vietnam was slated to be at Austin Fashion Week in April, celebrating his fifth year as a designer. That event, like many others, was postponed until later this year due to COVID-19. Nguyen still plans to debut his newest line, and also showcase a retrospective of his past collections with five featured pieces from earlier in his career.

“Some of my friends encouraged me to submit an application for Austin Fashion Week during my last year of college in 2015. I didn’t know how to sew or design, but I had been creating my own clothes for going out. We sent in an application with some photos of clothes I created for myself. I got the news from the show while I was studying for my final tests. They said that if I can come up with ten to twenty pieces, I can have a show. We did it in ten days. I went and bought a sewing machine and fabric, and created twelve pieces. I don’t even know how I did it,” Nguyen admits.

After the show in 2015, the owner of Austin Fashion Week told Nguyen that he was skeptical about accepting his application because the burgeoning designer had no sketches and no clothing, but he gave him a chance because he had heard Nguyen’s story.

The Journey to Self-Discovery

Nguyen’s story starts in Vietnam, where he grew up before moving to Houston by himself in 2005, at age 15. He attended Memorial High School while living with a host family. Before moving to the U.S., Nguyen admits struggling in school in Vietnam—not only because he was gay, but also because he was creative and thought of himself as “different.” Both were aspects of his life that his parents did not approve of. Nguyen felt stifled and began acting out by bullying other students. Eventually, he took a year off from high school while he decided on his next steps.

“My family has this place that takes care of sea animals. There are a lot of people from all over the world, like Russia and Australia, that work there. I took some time working there, and it was the first time I was able to establish a deeper connection with non-Vietnamese people, and different people from around the world. I improved my English and learned more about different cultures. That’s the moment I knew I wanted to get out of my country and see the world. I told my family I wanted to study abroad, and they chose Houston because of a family we had a connection with here,” says Nguyen.

But that Houston host family proved to be less than ideal as Nguyen realized they were more interested in taking advantage of his family than in helping to raise him. He then moved in with a second host family, where things worked out much better. He is still very close to them today.

Initially, Nguyen was supposed to return to Vietnam after he graduated from high school. Instead, he decided to enroll in the University of Houston-Downtown, where he earned a degree in international business in 2015. By the time he graduated, he had his first fashion show under his belt and decided to pursue a career in fashion. His business degree, combined with his natural sense of style, proved to be a winning combination.

With June being Pride Month, Nguyen added some reflections on his first Houston Pride parade in 2009. “I was actually nervous. I was still struggling to accept who I am. But seeing the joy and pride [in the parade crowds] made me realize that I’m not in it alone. In a way, it has really helped me a lot in loving myself,” says Nguyen.

Nguyen also discovered a major source of support from his grandmother. During his debut at Austin Fashion Week, she happened to be visiting from Vietnam and attended the show.

“When my grandma saw me happy, she understood what I was missing because my family did not want me to get into art. They did not support a guy doing art and being gay. My mom steered me away from all of that. They wanted their kids to be doctors and lawyers because they think art doesn’t make any money. But my grandma believed in me. After the show, she told me to go back to Vietnam to start my official collection. That collection had twenty pieces of women’s wear. Three months later, I showed again at Austin Fashion Week and then New York Fashion Week,” says Nguyen.

Like Austin Fashion Week, the 2020 Houston Pride parade has been postponed, and Nguyen hopes the event will be brought back later in the year.

The Art of Evolving

These days, Nguyen has two main studios. He spends three months out of the year at his studio in Vietnam, designing and working with eight full-time employees who help build his designs. He also has a studio and living space in Montrose, where he has two assistants who help him with operations locally. Although his business is mainly focused on private clients and custom orders, he is working to expand that to a collection of ready-to-wear pieces that would be distributed in stores like Saks or Tootsie’s.

He is also growing beyond fashion as he works on his first music project—an EP of five to six songs entitled Vanity. Much like his inspiration for fashion, Nguyen says this project is “not just about music. It’s about doing what we love most and becoming the person you were meant to be, rather than the one the world says you’re supposed to be.” 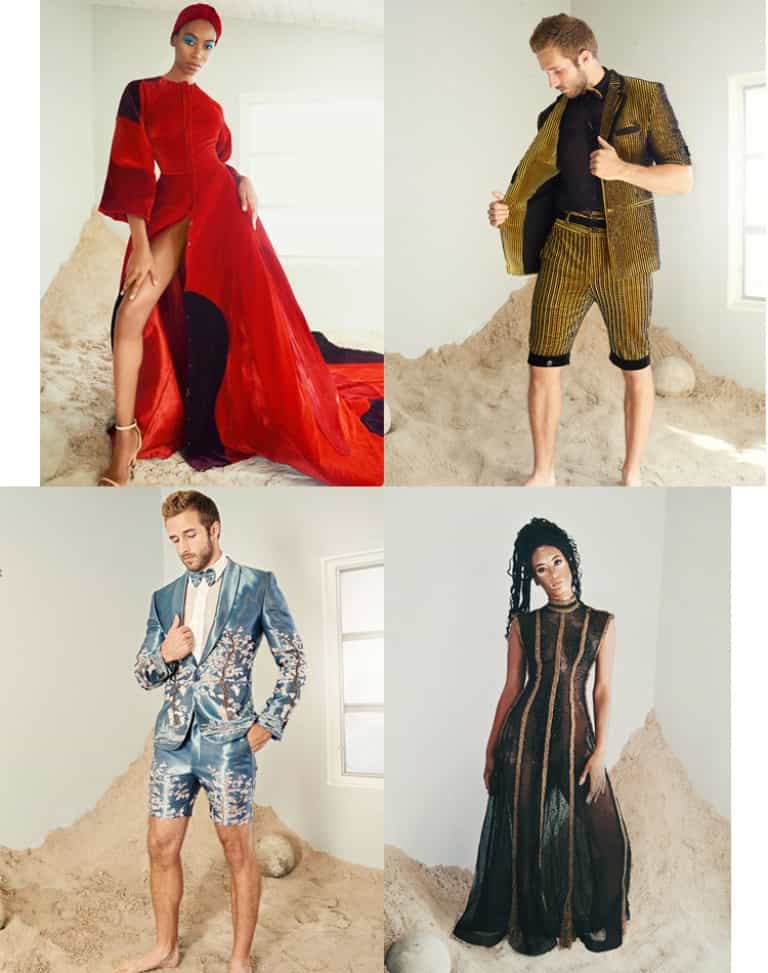