Mexico City (AP, Sept 21,2017): A delicate effort to reach a young girl buried in the rubble of her school stretched into a daylong vigil for Mexico, much of it broadcast across the nation as rescue workers still struggled in rain and darkness early Thursday trying to pick away unstable debris and reach her.

The sight of her wiggling fingers early Wednesday became a symbol for the hope that drove thousands of professionals and volunteers to work frantically at dozens of wrecked buildings across the capital and nearby states looking for survivors of the magnitude 7.1 quake that killed at least 245 people in central Mexico and injured over 2,000.

Vladimir Navarro spent the night working at the site of a collapsed school. The university worker said rescuers are “just metres away from getting to the children,” but the rubble is unstable and they can’t access it until it is shored up.

“Taking any decision is dangerous,” Navarro said, adding they need a large crane to come in and help. 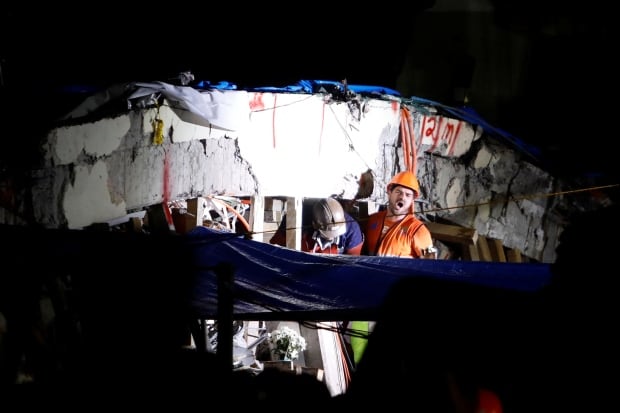 Rescue workers search through the rubble for students at Enrique Rebsamen school after the earthquake in Mexico City. (Edgard Garrido/Reuters)

The death toll rose after Mexico City Mayor Miguel Angel Mancera said the number confirmed to have died had risen from 100 to 115. An earlier federal government statement had put the overall toll at 230, including 100 deaths in Mexico City.

Mancera also said two women and a man had been pulled alive from a collapsed office building in the city’s centre Wednesday night, almost 36 hours after the quake.

‘You still hear people in there’

Even as President Enrique Pena Nieto declared three days of mourning, soldiers, police, firefighters and everyday citizens kept digging through rubble, at times with their hands gaining centimetres at a time, at times with cranes and backhoes to lift heavy slabs of concrete.

“There are still people groaning. There are three more floors to remove rubble from. And you still hear people in there,” said Evodio Dario Marcelino, a volunteer who was working with dozens of others at a collapsed apartment building.

A man was pulled alive from a partly collapsed apartment building in northern Mexico City more than 24 hours after the Tuesday quake and taken away in a stretcher, apparently conscious.

In all, 52 people had been rescued alive since the quake, the city’s Social Development Department said, adding in a tweet: “We won’t stop.” It was a race against time, Pena Nieto warned in a tweet of his own saying that “every minute counts to save lives.”