Local Vietnamese refugee to meet mariner who rescued him in 1978

At first glance, Sealand — the name of Nguyen’s restaurant at 47 Miracle Strip Parkway — seems a reasonable moniker for a coastal town restaurant serving fish, steak and other dishes; a kind of upscale take on “surf and turf” offerings.

But that’s not it. Not at all.

For Nguyen, the name is an homage to the shipping company that owned the cargo vessel that rescued him, his family and dozens of other refugees as they fled the oppressive Vietnamese communist regime in the wake of the Vietnam War.

“That’s the company that saved us,” Nguyen said on a recent afternoon, sitting at a table in the restaurant he opened more than 15 years ago

The SS Gateway City, a Sea-Land containerized shipping company vessel, was plying the South China Sea between Bangkok and Hong Kong when, on the afternoon of July 13, 1978, the crew spotted a small fishing boat, a white flag waving above it. 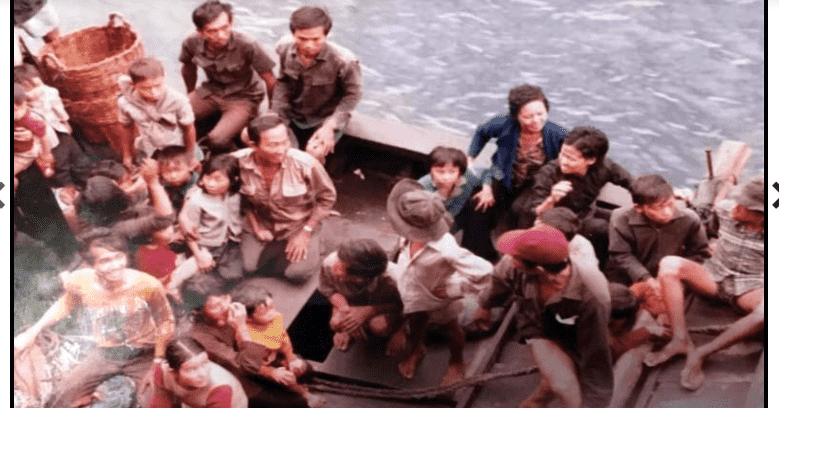 The fishing boat, which had been at sea for a few days and nights, made its way alongside the Sea-Land ship. Initially, the SS Gateway City’s captain had planned to load the cramped fishing boat with food and water and send the 51 Vietnamese refugees on their way.

But after boarding the fishing vessel and seeing the conditions on board, including a lack of sanitation, Chief Ship’s Mate Georg Pedersen convinced the captain to take the refugees aboard the SS Gateway City.

And sometime later this week, in Seattle, Nguyen will meet face-to-face with the man who set him up for that journey.

“I’ve been searching for 40 years,” Nguyen said this week, just a couple of days before he, his wife, Noi, and other family members were set to fly to Seattle.

Nguyen’s search ended just a few months ago, when a cousin happened to see a magazine article about the SS Gateway City’s rescue of the Vietnamese refugees.

Written by Pedersen, the story appeared in Sidelights, a publication of the Council of American Master Mariners, which allowed Nguyen to track down a phone number for Pedersen.

“I said, ‘Georg, I’m one of the people you rescued!’ Nguyen said, recalling the conversation. In the ensuing months, the two have exchanged gifts, Nguyen sending some of his restaurant’s special spices to Pedersen, and Pedersen sending Nguyen some Sea-Land memorabilia.

Looking forward to their upcoming meeting, Nguyen said, “I’m going to just give him a big hug, and a thank you.”

For his part, here’s how Pedersen, who himself has been trying to track down the refugees picked up by the SS Gateway City, remembers July 13, 1978.

“All eyes were on me when I entered the boat with men, women and children jammed in … unsanitary conditions,” he said in the Sidelights story. “Their spokesman told me they had been sailing around for five days dodging the Thai fishermen known for robbing the refugees for everything they own and raping the women. They had been at sea for five days and were completely out of water and food. He also told me that several large ships had sailed past them without stopping.”

He didn’t know it at the time, of course, but the young Nguyen’s odyssey was part of a story involving tens of thousands of Vietnamese who left their country by boat, braving pirates and storms in overcrowded vessels bound for Hong Kong, Indonesia, Malaysia, the Philippines, Singapore or Thailand as a first step in making it to the United States.

His family’s exodus likely was made easier because of his father’s work as a fisherman, but it was not without considerable dangers.

Nguyen, his siblings and his mother left their home under cover of darkness as they departed the country. They first made their way to a small boat that took them to their father’s larger boat, which had been purchased with money contributed by the refugee families.

On their way to the smaller boat, Nguyen and his mother and siblings had to race across fields and roads, watching for passing vehicles.

“If we saw headlights, we had to duck down,” he remembered.

But Nguyen’s most poignant memory of those few days is of his father’s voice once the family got aboard the crowded boat to motor off into the South China Sea. To be absolutely certain the family was together, Nguyen said, his father did one simple thing.

“He called all of his children’s names before he took off,” Nguyen softly said.

Even now, the memory of those July days more than 40 years ago continue to have a profound impact on Nguyen’s life, well beyond his simple gesture of naming his restaurant for the shipping company.

“My parents say, If Sea-Land wasn’t there …,′ Nguyen said, stopping in mid-sentence as if to ponder that alternate reality.

And then, he finished the thought.

“We’re the luckiest people,” he said.