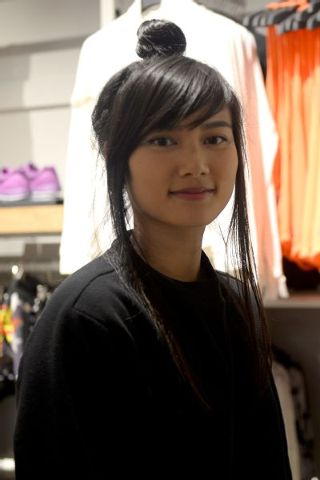 (espnW.com, Nov 1,2017): One of the most common misconceptions of Ngoc-Hien Nguyen’s job is that she sits at a computer and draws all day. As a senior apparel designer for Reebok, sketching is only part of what she does — around 20 percent of her job, she guesses. Most of it is conceptual.

When Nguyen has a clear design concept in mind, it might take her only a couple of minutes to make a 3D sketch using her private sketchbook and then an hour or two to transform it into 2D via Adobe Illustrator or Photoshop. When the ideas aren’t as concrete, it might take her a couple of days. But it’s more than drawing a T-shirt or a tank top, identifying what kind of fabric it needs, coming up with a color scheme and sending it to the developer, who then sends it to the factory. It’s also making sure each product is useful and effective.

“I love that you design garments that have a purpose,” said Nguyen, who has been with Reebok since June 2016. “They’re all beautiful, and they’re all pretty in their own way, but I love that you can put in the performance part and the functional aspect of it. It could be fabrics, the design cutlines, details, trims or technology.”

Nguyen, a daughter of two Vietnamese refugees, grew up in Mönchengladbach, Germany, where her fascination with fashion began when she was a child going through her parents’ wardrobe, cutting their clothes apart and sewing them back together. She loved sketching and anime — “I was a huge fan of ‘Sailor Moon,'” she said — but didn’t know exactly where everything would lead. Her parents wanted her to become a doctor, and for a while she thought she would become a surgeon. But that field didn’t allow her to be as creative as she wanted.

She studied at Hochschule Niederrhein, University of Applied Sciences, near her hometown and worked as a waitress and a gym attendant to help pay for school. Months after she graduated in 2009, Nguyen joined Puma as an assistant performance apparel designer. She moved on to running gear after a year and a half. That included designing clothes for the London Olympics and even getting the chance to go through outfits for athletes such as Usain Bolt.

Now working at Reebok’s new office in Boston’s Seaport District, Nguyen is already designing apparel set to be released in fall 2019. She’s focused on running and training gear but recently took part in Reebok’s collaboration with Cottweiler, a more lifestyle and fashion collection that is set to come out next fall.

Is Vancouver the new Gangnam? Korean pop video filmed entirely in Vancouver gets millions of views upon debut

Prev Next 1 of 3,102
We use cookies on our website to give you the most relevant experience by remembering your preferences and repeat visits. By clicking “Accept”, you consent to the use of ALL the cookies.
Cookie settingsAccept
Manage consent